ProHort were commissioned to prepare a Landscape Strategy in London for the proposed redevelopment of a pre-existing equestrian. The primary purpose of the strategy was to provide the developers and local council with a document that responded to existing local borough environmental policy, sustainability and transport initiatives and the concept plan. The strategy incorporated the principles set out in these and incorporated certain ideas and initiatives into the landscape strategy proposals. The strategy was designed to be ﬂexible in order to adapt to change and to respond to a place that is by its nature ever changing.  And provides a long-term vision for the enhancement of the site. 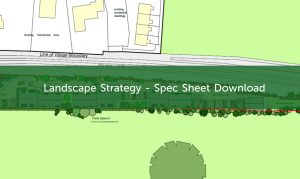 The principal concern of the local council was the potential impact on the ecological value of the site. Having been vacant for a number of years the area had become overgrown resulting in the development of numerous valuable wildlife habitats identified as scarce in the local borough. The strategy was informed by visiting the site and utilising existing ecological and arboricultural surveys to help formulate a holistic methodology designed to not only retain the most valuable ecological features identified but to proactively manage these and further improve them.

In addition, the strategy outlined methods to create further wildlife habitats through the planting of carefully selected plants such as the inclusion of species most beneficial to invertebrates within the proposed hay meadows of the site. This, together with careful management of the meadows and other areas were designed to provide a valuable food source for locally at-risk species such as bats. Furthermore, the strategy considered the character of the site and local perception of it. The inclusion of a designed tree shelter belt was put forward to help retain its existing character as a wooded space.